In Conversation With Linda Riley 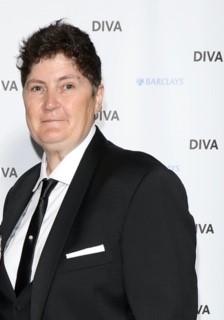 Lesbian icon, Publisher of DIVA magazine, Ex-Director of GLAAD, Patron of several group (including WOW), mother of two – is there anything this woman can’t do? Apparently not, as I found out during this Lockdown interview.

Tell me about your coming out story and where you are now as a person?

I came out at 15 as a lesbian. It wasn’t a great coming out experience to be honest. My Mum took it badly and I remember that in those days they used to practice conversion therapy – electro therapy. My Mum was opposed to me coming out and wanted me to seek psychiatric help, so I left home, at 15. My Mum said years afterwards that she didn’t push me to leave, but the alternative wasn’t great – I knew I didn’t need ‘help’, so I felt I had no choice. It was quite normal then to leave school at 15 to get a job, so it that way it was easier to leave. My Mum was till opposed to me being out, and she used to tell me that I would never get married or have kids, but she came to my CP and accepted my kids. It was great to heal the relationship in that way. I actually left school with no qualifications!

Many people would label you as butch. How do you identify and how do you think butch women are represented in our community?

Actually I don’t self-identify as butch, I identify as a cis-lesbian. Although my onward appearance is butch and I know other people would identify me in that way, it’s just that – my outer surface self.  But labels are everywhere, and we use them all the time, for ourselves and others.

In my view butch women are still underrepresented – there are visible for the fact that they stand out as being so few. 10 years ago I was a publisher of g3 magazine and I argued the case to have more butch women featured on the cover. The editor at the time memorably said that ‘butch women are a dying breed!’

Has ‘being butch’ changed in the last 20 years? How visible are butch women and do you think there is a struggle between butch identity and with Trans and non-binary identity?

I think now it has changed, there is less stigma around being butch and people don’t revert to the old trope of the traditional roles and the butch/femme stereotyped relationship. I don’t think we see that anymore. There is a great novel, Stone Butch Blues, which references butch culture in 1970’s America, but the fact that it is so dated just shows how much we have moved on from then.

Butch lesbians can be vulnerable though; people can have a lot of preconceptions around outer appearance – people have thought that I am a hard person, and nothing could be further from the truth.

The struggle of identity can often be more an internal one. For example I have heard people unfairly say that trans men are betraying lesbians – in the way that Trans men are formerly lesbians which is a myth in my opinion, I firmly believe that people should own their own labels and be more accepting of others.

But the reactions of lesbian trans exclusionary radical feminists towards Trans women particularly those Trans Women who are lesbian identified; the anger and violence through their words and actions; it’s shocking particularly because they forget that we endured the same abuse and hatred 20 years ago. The looks and issues I would get just using a public toilet, the same words and hate. I don’t understand why lesbians who suffered that, why they would want our Trans siblings to go through the same.

How can we continue to foster an inclusive lesbian community?

There are lots of ways, use your platform – both digitally and with people you know, to support your friends and call out bad behaviour – my mantra is to educate not berate.

Attacking doesn’t work – you need to use your voice from a place of love, and be open in your support. In the past I have lost friends who were less inclusive but the community is becoming more inclusive.

Standing up and speaking out has really made a difference – I have had lots of hate, death threats and trolls but being vocal has ultimately made a positive difference. I remember my allies speaking out for me and now I get the chance to pay it forward. No matter what abuse I get and I have had actual death threats posted to my office I always think that the abuse I get is mild compared to what our Trans siblings get.

How can we/how are you marking Lesbian Visibility day? How can we be visible in Lockdown?

At DIVA we are marking Lesbian Visibility Day by making it a whole week! With community support from Stonewall, The Kennedy Trust, Mermaids, and Diversity Role Models, a Guardian supplement, as well as launching the largest ever survey for LGBTQI women to ensure voices are heard and recorded, and the Top 100 lesbian Visible list. We will celebrate extraordinary women throughout the week. This year, more than any year, the biggest platform will be virtual. Events like this are so important as some people are nervous about using the word Lesbian, due to the negative connotations around the word. I find it heart-warming that at DIVA events we have positive feedback from our Trans siblings saying how safe they feel.

How is DIVA coping with the Lockdown? Is it running parallel with the increasing digital age?

Thanks for asking! We are coping well, and at the moment we are really busy with Lesbian Visibility Week, and our digital subscriptions have increased as many of the outlets to buy a hard copy in have closed. We have also set up a Facebook page ‘DIVA community’, as we have found that many LGBTQI women are quite isolated and find it easier to connect online. The group specifically allow women to discuss Lockdown, giving them a safe space to talk about how they are dealing with it.

Finally, as Publisher of DIVA magazine, what’s the biggest perk of your job?

Pre lockdown it’s definitely the people I get to meet, from old friends from back in our struggling youth turned famous, to some real icons of lesbian history, such as Mhari Black and many more. My team make fun of me posting pictures on social media all the time, but if there’s one perk, that’s the one!