This is an insight into Liz’s story and why the Lily Foundation exists.

“I didn’t ever make a conscious decision to do what I do.  My story will explain why”

After a relatively normal pregnancy our third daughter lily was born on 24th August 2006.  She was born by an emergency c-section 5 weeks early due to lack of blood flow through the placenta.  It all came as a bit of a shock. However, despite being very small at 3lb 4oz, Lily was otherwise healthy.  She had to stay in the special baby care unit until she reached 4lbs – then she could come home.  And that became the first problem.  Lily was not able to gain weight.  IT took her 1 month to reach the 4lb mark.  But doctors could find no reason why. 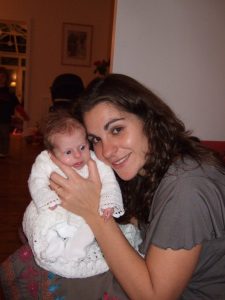 We finally brought Lily home towards the end of September.  Gaining weight was still a huge issue.  She was baffling everyone.  The Health Visitor started to visit daily to weigh her.  She was feeding well, but not gaining weight.

This continued for a further 3 weeks when things took a turn for the worse.

Two memories that haunt me still even today 14 years later. But they have shaped my life since, so important for me to talk about.

I was out shopping with my mum and my two eldest daughters who were 3 and 18 months at the time.  Lily had started to cry, and we went back to the car.  As I went to lift her out of the pram, I noticed she had stopped breathing and was foaming around the mouth.  I called an ambulance who asked me for an address.  We were on the top floor of a multi-story carpark.  I gave them the name of the carpark, but they needed a road name which I just didn’t know or could remember.

Two amazing guys were walking past and asked if I needed help – they ran off to find the road name.  In the meantime, the ambulance crew on the phone asked me the height of the barriers in the car park to ensure that the ambulance could get up – I had no idea.  So, I had to leave my mum with Lily and the girls and run down three flights of stairs to find security to help.

Eventually a first responder car arrived by which time Lily had started to breath.  We got her to hospital where she stabilised and weas sent home after a couple of hours.

Unhappy with the discharge from hospital as something just didn’t feel right, we decided to take Lily back to the hospital that she had been born in.  They were concerned with the lack of weight gain so admitted her for tests and monitoring. And things just got worse.

We sere sent to the Royal Brompton hospital for heart test and her doctor spoke to us about a possible metabolic condition.  My first thoughts were typical, she is going to always have issues gaining weight and eat high fat diet, mars bars etc… if only!

However, on the way back to our local hospital in a taxi Lily stopped breathing again and went blue.  Once again, I called 999, they requested a postcode for our location.  I had explained that we were in the Kings Road opposite Woolworths.  But they wanted a post code.  So, I ran into Robert Dyers, which was the nearest shop and gave the ambulance crew the postcode on the phone.  But it didn’t match my location (Woolworths).  We were so lucky that we had a paediatric nurse Sharon, who was with us on that day, she was giving Lily lifesaving CPR, but a crowd had started to build up outside the taxi and one lady took it upon herself to flag down an ambulance who came to us.  Sharon kept shouting “I am losing her, we need oxygen”.  It was the most terrifying experience of my life.  Had Sharon not been there, Lily would have died that day.

The ambulance arrived and took Lily to the nearest hospital.  Another horrible experience.  Watching this tiny baby, barely 4lbs in weight in resus, surrounded by lots of amazing people trying to save her life.  I remember as if it was yesterday as they put the canular in her hand, Lily didn’t flinch, not a single cry or movement.  I thought then and said to Sharon, she is going to die, isn’t she?

But somehow Lily survived the night in the High Dependency Ward.

But things got worse, just a couple of days later as Lily stopped breathing again and this time, she had a cardiac arrest.  She was on a defibrillator and transferred to the Evelina Children’s Hospital in London.

Lily was put on life support and we were told that they believed that Lily had a Mitochondrial disease for which there is no cure and no treatment.  She was going to die.

We asked how long she had, but doctors were unable to give us a prognosis.  We knew that Lily would not have a medium- or long-term future.

After 5 days of tests the time came for us to make a decision.  Lily was being kept alive by a machine.  We had to make the agonising decision to turn off life support.  As Lily’s parents, with two children at home, we knew that we couldn’t live life like this for much longer.  It was just awful seeing Lily with a tube almost a big as her stuck down her throat.   We could see she was uncomfortable.  We couldn’t cuddle her as and when we wanted.  It was no life for her or for us.

So, the weekend came, and the family came to say their goodbyes.  We withdrew life support, but a miracle happened and despite all odds, Lily started to breathe by herself.

We took Lily home and she survived 6 months with very little hospital intervention, lots of cuddles and love.  We took the time to try and learn as much as we could about the condition, trying to find others in the same situation.   However, we struggled.  It seemed that all the information available was for doctors written by doctors and we couldn’t find any other parents in the UK with a child with Mito.  And because we had this time, with a diagnosis, that we decided to set up the charity in Lily’s memory, to support families and fund research so that other parents wouldn’t have to hear ‘I am sorry there is no cure and no treatment.  Your child is going to die.’

The reason I have told you all of this, is because it is so important to where I am now.  If we had lost Lily at any one of those times when she stopped breathing her death would have been unexplained.  The first incident in the pushchair would most likely have been put down to cot death.  And if that had happened my life, career, future and outlook on life may have been very, very different indeed.  Lily not dying before that diagnosis was so, so important.

We faced many challenges along the way.   For the first year everyone did everything pro bono.  I had two small children and was working 3 days a week as a teacher in a secondary school in London.  It was hard to find time, I had no idea about what I was doing, how to run a business, but my passion to be there for other parents and to make those changes inspired me to keep going.  And over time, more and more families connected with us.  It is bittersweet when you hear from a new family.  In one way it is exciting that they have found you, but it is also so sad knowing and understanding what they are going through.

Obviously, the challenges changed as the charity grew.  We got to the point of employing staff and the realisation that my role was changing; I was having to let things go and give responsibilities to others and of course start to manage a team.  I have never really liked that aspect of the role.  I still see myself as Lily’s mum, not as a CEO but I have leant that a team needs direction and leadership.  I still don’t like it though.

Other than Lily and my other two girls, there is not just one inspiration.  I have many people who have and continue to support me on my journey.  A continual inspiration are the families and patients we meet with Mito.  They are the most incredible group of people.  Faced with living with a progressive disease, for which there is no treatment, cure or prognosis, No idea what tomorrow will bring but my girls make me proud and make me smile every day.

As a charity we have achieved so much in 14 years.

There have been many highlights since starting the charity.  I will never forget the day we received our first cheque / donation through the post.  The first phone call I received.

But sitting in the public gallery of the House of Commons hearing that the law had been changed to allow Mitochondrial donation, the cheer from parents sitting with us in the gallery was just the most incredible experience of my life.  After months and months of campaigning The Lily Foundation network had changed the law – so unexpected when we first started out!

Secondly and most recently was being involved with a Mito storyline on Coronation Street.  To see the disease on mainstream TV, to see the Press talking about Mito and a nation of Corrie viewers now aware of the condition feels like a real step forward in our mission to raise awareness.

Despite losing Lily, I have always considered myself as lucky.  We found out about Lily’s condition before we lost her and she inspired me, my family, and The Lily Foundation.  When I found out about Lily having Mitochondrial disease, I knew that I didn’t want people and most importantly I knew I didn’t want to feel sad when I thought about her.  I wanted her short life to have a purpose and meaning.  The Lily Foundation is just that.

The team who works alongside me are incredible.  Committed and passionate.  Without them and our incredible Lily families, we would not be The Lily Foundation that we are now.