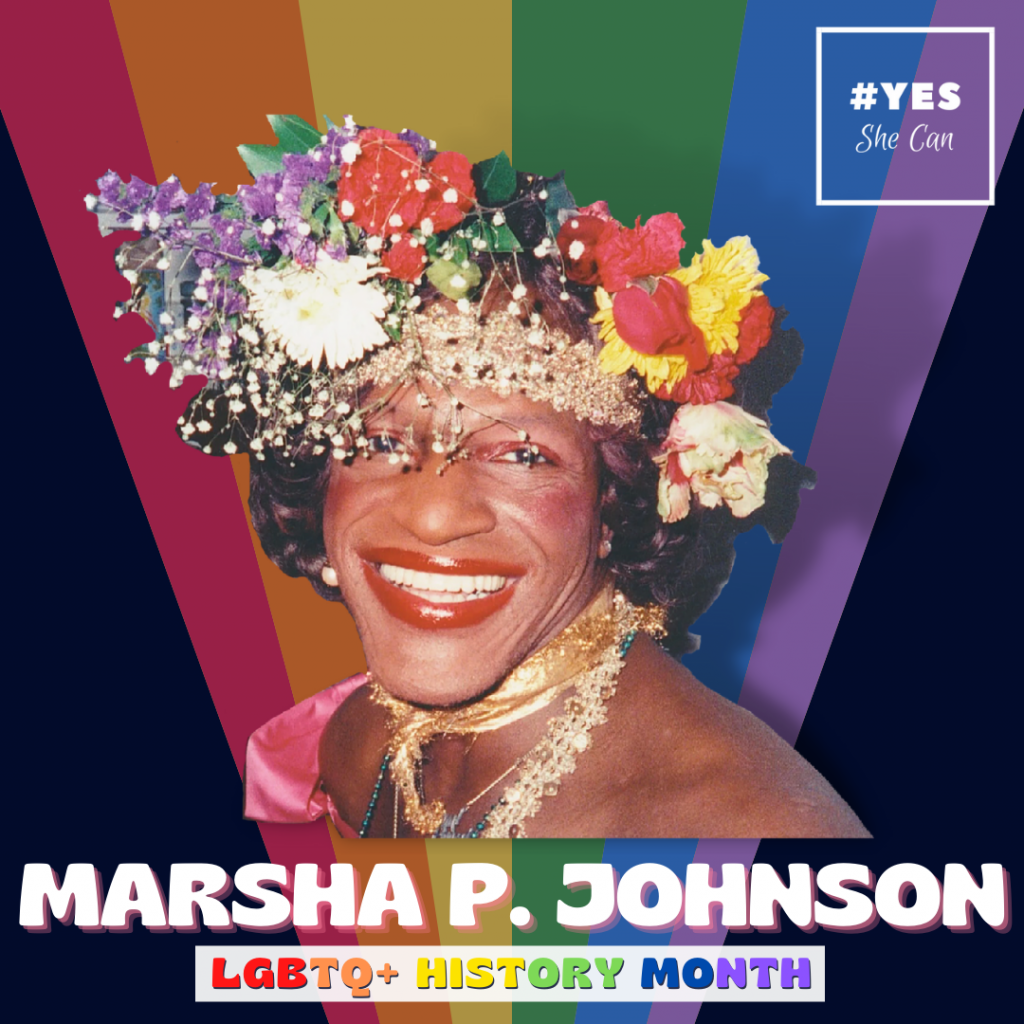 "NO PRIDE FOR SOME OF US WITHOUT LIBERATION FOR ALL OF US."

who was marsha p. johnson?

Marsha P. Johnson was an American gay, trans women and drag queen from New Jersey, whose activism in the 1960s and 70s had a huge impact on the LGBTQ+ community.

Marsha P. Johnson was born in the 1940s in New Jersey. She grew up in a very religious family with six other siblings and their two parents. Marsha started wearing dresses when she was five years old but had to stop for a while due to harassment from boys who lived nearby. During an interview, she shared her story about being raped by a 13-year-old boy when she was younger. After this she thought the idea of being gay was “some sort of dream” than a reality, especially during this time when being gay was classified as a mental illness in the United States. The LGBTQ+ community were regularly threatened and beaten by police and were shunned by many in society. When she was 17, she moved to New York with only $15 and a bag of clothes. Marsha began working as a waitress after moving to Greenwich Village in 1966. Marsha’s life had changed when she began hanging out with street hustlers. “My life has been built around sex, gay liberation, and being a drag queen”, she explained.

Marsha originally used to go by the name “Black Marsha,” but she later changed her name to “Marsha P. Johnson,” a drag queen name. When asked about gender, she said the ‘P’ stood for “pay no mind” and used the phrase sarcastically. Marsha identified as gay, transgender, and a drag queen. She was known for being herself and not fearing the harassment and ridicule that came during this time while dressing and living as a woman despite being deemed to have ‘masculine’ features. She wore very exotic hats and jewellery which stood out to the public and attracted attention to her.

Marsha was one of the first women and drag queens to be welcomed to Stonewall Inn, which had previously been a gay men-only bar. The Stonewall Inn was raided by police in June 1969. Over 200 people were forced out of the bar and onto the streets by police, who then used excessive force against them. Gay bars were places of refuge where gay men, lesbians, and other sexually suspect people could socialise in relative safety from public harassment. However, many of those establishments were regularly harassed by police. Marsha was a key figure who stood up to the police during the raids. She resisted arrest and in the following days a series of protests and riots happened demanding gay rights. The news of these protests spread throughout the world, inspiring others to join protests and rights groups to fight for equality. The first openly gay march took place in New York a month after the protests, marking a watershed moment for the gay and trans communities worldwide.

tHE IMPACT SHE HAD:

Even though the Stonewall riots sparked a wave of support for the LGBTQ+ community, there was still a lot of prejudice against them. It was common for parents to kick out young gay and trans people from their homes. Marsha and Sylvia Rivera, who was also an activist, founded STAR – Street Transvestite Action Revolutionaries – an organisation to help homeless gay and trans people. Many transgender people were very vulnerable on the streets as they faced violence from intolerant people. Marsha herself also had experienced living on the streets in her later life.

Marsha also joined another activist group after the Stonewall Riots, the Gay Liberation Front (GLF). The GLF advocated for political action and protection for citizens who face oppressive laws and unequal ethics because of their sexual orientation or behaviour.

Despite having several mental health issues, Marsha dedicated much of her life to helping others. Marsha was dubbed the “Saint of Christopher Street” (where the Stonewall Inn is located) for their generosity to people in New York’s LGBTQ+ community.

Marsha died on the 6th of July 1992. Her body was discovered in New York’s Hudson River. Her death was ruled a suicide by police and investigators, but those who knew her and were close to her insisted she was not suicidal. Witnesses saw Marsha being harassed earlier in the day and demanded that her death be investigated as a murder. In 2012, campaigner Mariah Lopez was successful in convincing the New York Police Department to reopen Marsha’s case as a possible murder. The police changed Johnson’s death cause from “suicide” to “undetermined.”

Marsha P. Johnson’s legacy lives on in the LGBTQ+ community and elsewhere. She is an inspiration to everyone. She demonstrated that you can truly make a difference and stand up for what you believe in. Throughout her life, she showed so much kindness and strength, whether that was through her activism or simply helping those in need. She is 100% a role model!

You can check out The Marsha P. Johnson institute here: https://marshap.org/about-mpji/

why we shared Marsha’s story:

It was critical that we shared Marsha’s story, especially during LGBTQ+ History Month, because she was a pivotal figure in effecting change for the LGBTQ+ community. There would have been no progress to get us to where we are today if people had not been active during a time when being a member of the LGBTQ+ community meant being marginalised. Marsha was not only a motivator for the LGBTQ+ community, but she also demonstrated that anyone can make a difference in a variety of ways, whether through activism or simply helping those in need. It’s important to shed light on those whose stories deserve to be told.

If you enjoyed reading this blog, you can read more on LGBTQ+ History Month here.