Melanie Stewart – Breaking the walls down around gender defining roles 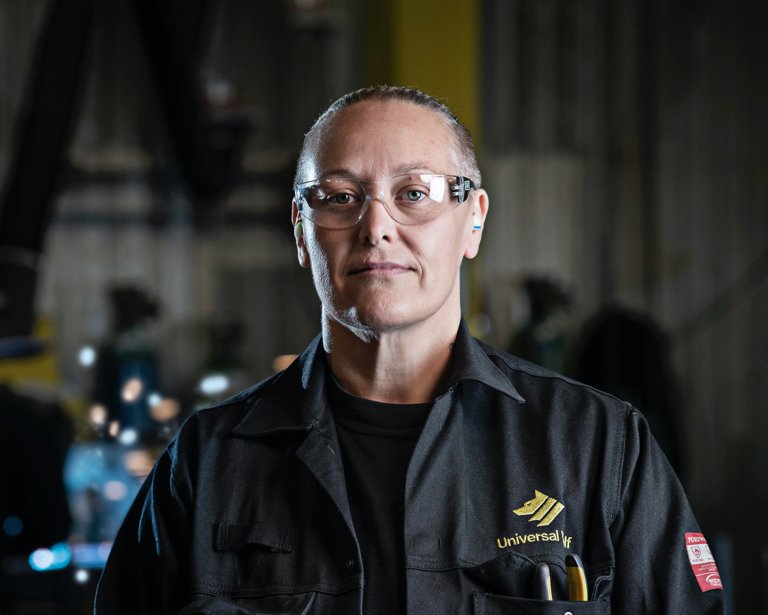 Melanie Stewart is Welding & Fabrication Lead at Universal Wolf. She is responsible for maintaining industrial and quality welding standards; driving improvements in our welding processes and the training that goes with them. She is also heavily involved in Continuous Improvement across the business, with a focus on welding and fabrication. Mel is determined to break down barriers for women entering not just the welding and fabrication sector, but all manual trades.

At school, Mel concedes that she had no awareness of the manufacturing and engineering environment or the fact that there were jobs available in the sector. Her school didn’t actively encourage girls towards careers in technology, and she left not really knowing what she wanted to do with her life. Her dad, who owned a mechanical engineering and maintenance company, was instrumental in setting her on the path to what would become a lifelong passion and career, encouraging her to come and work in his office to at least get some experience. Once she got there, she was fascinated by the shop floor and found the work going on outside of the office a lot more interesting than what she had been brought in to do. She could often be found wandering out to get involved with what was going on in the manufacturing area instead!

Seeing how interested she was in the hands-on elements of the business, her dad suggested she should look at completing an apprenticeship. She started a Mechanical Engineering apprenticeship, following in her dad’s footsteps. Having stuck with this for one year; she found herself continually gravitating back to welding and fabrication, which she had developed a passion for. In her own words, she loved ‘the idea of welding, the noise, the melding of metal, the forming’. However, there wasn’t a lot of welding in the Mechanical Engineering apprenticeship programme. Her dad pulled her aside and suggested that she would get more from her career by following something she wanted to do. So, she started a Welding and Fabrication apprenticeship and her passion shone through, winning an Apprentice of the Year award after her first year.

At that time, there were very few females working within manufacturing environments and Mel was only girl on the shop floor in her company, and one of very few female welder/fabricators in the whole of the Northeast. She admits that this was a hard position to be in, and that she is still recognised now by people from her past who remember her as the lone woman working in welding and fabrication.

Mel experienced ongoing gender-based discrimination when applying for roles within welding and fabrication and found it difficult to secure jobs. On applying to positions recommended to her by former colleagues who had joined new businesses, it was commonplace that she wouldn’t receive even a phone call back. Several companies refused to give her a job, citing that a shop floor was no place for a woman as they would ‘complain too much’. She resorted to shortening the name on her CV to ‘Mel’, as ‘Melanie’ never received a call-back.

Overcoming this mindset was a huge challenge, and Mel feels she missed out on many opportunities because the men in charge were too narrow minded to give her a chance. Now that she has come up against and pushed through this barrier, she uses her experience and knowledge to push for more women in engineering, and support those looking to enter the profession.

Although there is still a long way to go, Mel feels the sector is much more accommodating of women than it was in years gone by. She was faced with bullying and intimidating behaviour in her early years in the manufacturing sector, so much so that she nearly quit and walked away from it altogether. However, she decided that she wasn’t willing to let anyone else dictate her future, instead pursuing a career specialising in both welding and fabrication with an intent to prove to all those watching that women were just as capable and deserving of a career in the field as men.

Welding and fabrication opened the door for Mel to travel the world with work. She progressed from working on the shop floor to undertaking site visits – repairing and installing fabricated products. She discovered a flair for problem solving, pushing to find a solution to problems on-site rather than Shipping something back to a manufacturing site and incurring transport costs of thousands of pounds. Her role naturally progressed to Site Supervision, and then into Quality, which suited her detail-oriented approach and ability to master various different techniques.

In her current role as Welding & Fabrication Lead, Mel maintains an element of quality engineering, but with a focus on helping colleagues to improve skills, fill any gaps in welding capability, and making sure the ‘front end’ of production is generating product of a consistently high quality.

Mel instigated this development in her role, having originally joined Universal Wolf as Quality Engineer and then taking on the role of Responsible Welding Coordinator (RWC). She identified a need for a dedicated role focussed on training and development, and welding processes and procedures. She leads on the identification and integration of new technology into the business – for example, she is sourcing a new robotic welder, to remove some smaller and repetitive jobs from our welding and fabrication team, so they can focus on more intricate work. Her passion for Continuous Improvement also complements the role – Mel embodies the Universal Wolf company vision that ‘good enough is never good enough’. Her role and experience are critical, as we continue to drive forward on our aggressive future growth plans.

Mel has likened her career and the changing attitudes to women working within welding and fabrication to those towards women’s football in recent years, with derogatory statements and negative opinions giving way to acceptance and changing mindsets.

She feels that supporting the new generation of female welder/fabricators is key and will often reach out to women working in the sector on LinkedIn – particularly those who are new to the world of welding and may find themselves facing negative sentiment or stereotyping – to provide informal mentorship and encouragement and show that it can be done. While being the only female within a manufacturing environment for many years, across many businesses, was certainly challenging; she believes she has helped to change mindsets within those companies and paved the way for the women who subsequently joined those businesses further down the line.

Within Universal Wolf, Mel’s no-nonsense attitude has also inspired her colleagues to push for what they want, and not feel like they have to hold themselves back in their career goals. She has inspired one colleague, who joined the business as an Expediter at the beginning of the year, to move into a different role which was more aligned with her passion and aspirations. Mel’s success in and approach to her work also gave this particular colleague the push to join Universal Wolf’s ‘Grow Our Own’ programme which provides training to colleagues to progress their careers. Mel’s opinion is that she is proof that opportunities are there – you may need to be more assertive and stand your ground, which she acknowledges is a difficult thing to do – but it is worth it to do a job you love.

Mel is respected across the Group in her role as Welding and Fabrication Lead. She has brought real passion to the role and fosters a sense of pride in the work, processes, and output of our Welding and Fabrication team. She openly shares her knowledge and experience with others to help them progress and hone their skills – demonstrating herself to be a true leader.

Using her own personal connections, she is in the process of arranging a visit to the school within the local area, to talk to Design and Technology pupils about her career, how she came to work as a Welder, and the lack of direction she felt when she left school. Her hope is that this will help to provide some insight into the range of career paths available aside from progressing to Sixth Form and University.

Having recently become a mother has sharpened her determination even more and made her even more focused on – in her own words – ‘Breaking the walls down around gender defining our roles’.