Natalie Ellis – surround yourself with positive people who support you. 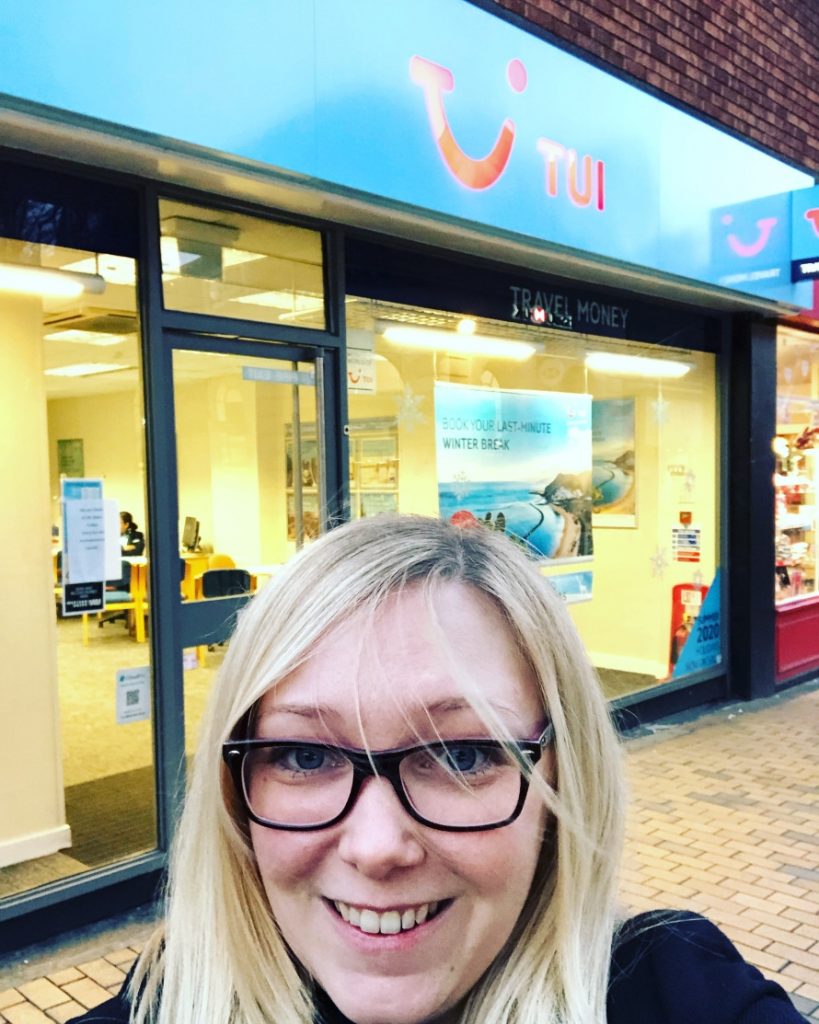 In this blog, #YesSheCan speak with Natalie Ellis. Natalie talks us through challenges she has faced, changing careers and never giving up. We hope you may find some inspiration from this blog during this tough time and that it will inspire you to not give up!

When I meet people that have either read the blog or seen me speak at an event, one of the first questions I get asked is how I managed to get from being a Travel Agent to an HR Consultant.

The reason I was inspired to write this post is that at this time of year, many people think, new year, new career, and I thought this may help some people if they were considering this particular situation.

The shameless selfie above was taken just before Christmas outside of the Maidenhead branch of TUI (formerly Thomson Holidays, and yes I did get some strange looks!) this is where I had my first proper job interview at the age of 18 when it was known as Lunn Poly (that may take a few of you back!). I was just about to finish my A-Levels in business, Travel and Tourism and I didn’t want to wait until my exam results, I wanted to get into work as soon as possible, so the day after my exams finished, I was working and sending people all over the world on their dream holidays.

About two years later, my business brain kicked in and I wanted more exposure to know how a business worked and how I could influence that, but I didn’t really know how I would go about doing that, so I left my Lunn Poly Dolly days behind and landed a job for an American company. I started out as an Administrator for a fast-paced sales team and was quickly moved into a Project Co-ordinator role supporting BT. It was in this role where I honed my customer service, problem-solving and strong administration skills which still serve me well to this day. I was with that company for a long time before I started wanting more from my career and whilst there was nothing wrong with my job. I was intrigued by how the people within the business managed to achieve so much. One day, I was at lunch with a colleague, and she said to me that I would be perfect for a job within HR.

It was at that point that I thought that I could make a difference in a HR career by supporting the organisation through its people, and this is where my desire for a career in HR came from.

From that day I researched the heck out of HR, was I a good fit? Would I be able to deal with complex and challenging situations? and the classic, am I a “people person”?

I identified that I could get qualified and that there were plenty of opportunities to progress through a HR career, plus I had the motivation and the drive to do it!

After countless application forms, and nine interviews, my last one (after many rejections for no HR experience) I was interviewed by the Head of HR at Entertainment UK (Part of Woolworths Plc). I instantly felt a connection as I walked through the doors of reception and it’s safe to say the interview was a tricky one, I was hungry for the opportunity and the environment just seemed to suit me. After Lorraine gave me a good grilling, she offered me the job on the spot and I actually jumped up with excitement! She told me that despite interviewing experienced candidates with a HR background, I was the one that stood out because of my passion and drive to succeed in a role and that to me it wasn’t “just another HR role”. She took me under her wing and during my time there, I experienced not only the entire employee lifecycle but the eventual winding up of the company. This taught me that despite the humble roots and good intentions HR is known for; you have to be really blooming resilient to stay within the profession because it is anything but cosy chats and cups of tea.

2008 through to 2011 were tough years, the UK had gone through the worst recession seen in decades, retail was on its knees (where I had most of my experience) and after temping for years (permanent work was really difficult to come by) I was given a break and offered a permanent role with an air freight company on Heathrow Airport called Circle Express. This is where my big break came as I stepped out of HR Administration and into a HR Officer/Manager role.

In 2012, I got a call from the CIPD telling me that I was a finalist at the CIPD People Management Awards for my studies and contribution to Circle Express, it’s a long story but I somehow managed to stop the company from closing after failing an audit (so if you think HR can’t make a difference, then you’d be very much mistaken!) I didn’t win the award, but I was a highly commended runner up and given a mention in the winner’s book, which was incredible and the proudest moment of my career. I am incredibly privileged to have been a part of it, little did I know the date I took along with me that evening (on his birthday!) was my future husband Mark, who has been my rock throughout my career.

It was after several years at Circle Express that Mark asked me to move “up north” with him, being a woman with roots in the West End of London, this was a very unusual move! So I took the decision to move to be with my now Husband and continued my career up here, but I have stayed true to my roots, and as the saying goes “you can take the girl out of London…”

It was from here that my career really stepped up a notch, I went from being a temporary HR advisor at Avon to a HR Business Partner, then to a HR Manager (phew!) during that time, I completed my CIPD Level 7 Certificate in HR Management and then after being made redundant, I joined the team at AHR Consultants in July 2017.

As my confidence grew, I started this little HR blog, I became a public speaker, I’ve been on the CIPD ACE blog squad, (not once but twice!) I became an ambassador for the CIPD Steps Ahead programme, featured in People Management magazine, and I achieved a sponsorship deal with ICS Learn to complete my CIPD Level 7 Diploma. One of the lessons I’ve learnt is to surround yourself with positive people who support you. I wouldn’t be where I am without them.

My advice to anyone is if you want something badly enough, just go for it. Just be sure that it is what you want, even with all my initial research, it could not have prepared me for the challenges that my career has presented me with!

Too often, we are too hard on ourselves, and this post serves as a reminder that our careers rarely work out how we plan them. There is so much pressure to do things by a certain point, or by a certain age, and trust me, it is absolutely fine if you don’t because there is always a reason. Never in a million years did I ever think that I would become a HR Consultant because I never thought I was good enough or knowledgeable enough, but after the team at AHR took me on, I’ve learnt more than I could have possibly imagined.

Yes throughout my career, I have learnt many lessons along the way, but it is self-belief, a positive attitude and motivation to do a great job that makes the impossible seem possible.

Thanks so much to Natalie for this amazing story of perseverance and motivation. We hope you are as inspired as we were! Find more inspirational stories here!

PrevPreviousSophia Lee Roberts: Volunteering to support a future in the space sector!!!
NextFran Bexley – BE YOURSELF, BE CONFIDENT, BE HONESTNext
#Yesshecan