Stephanie Morgan – Take yourself out of your comfort zone 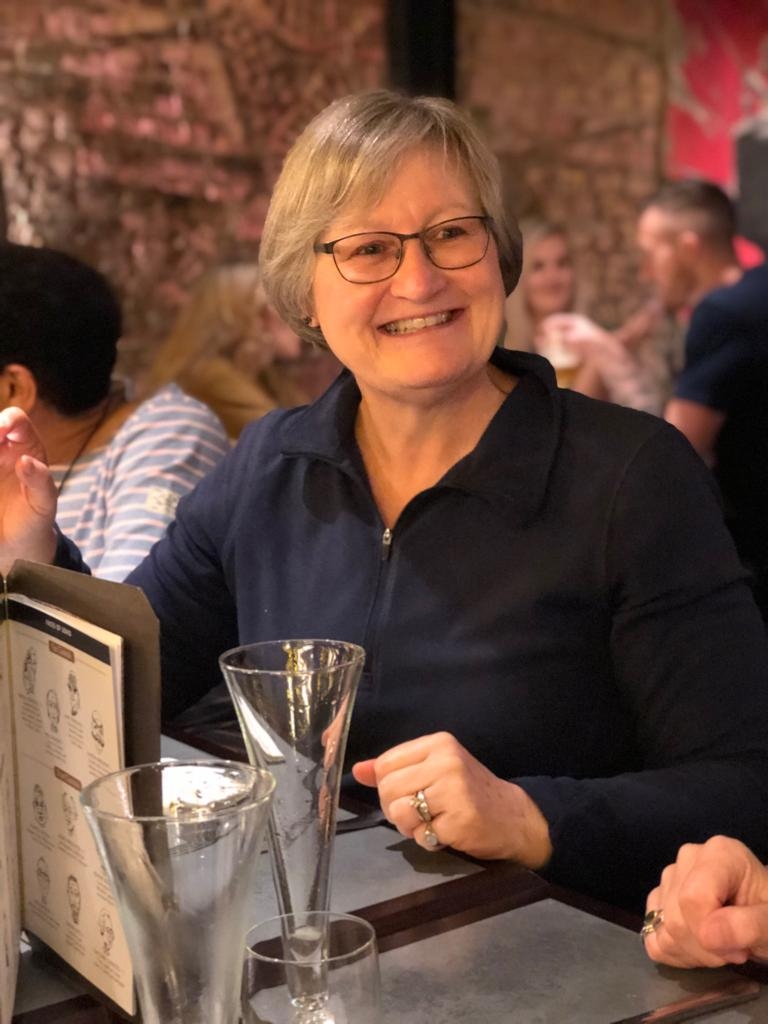 #YesSheCan bring you Stephanie Morgan, a retired Deputy Chief Constable, now the Chair of Trustees of Leicester, Leicestershire and Rutland Community Foundation and Steering Committee Member for Women in Philanthropy.

I was brought up in Suffolk, my childhood was a happy and supportive one. I went to university and obtained a degree in History prior to joining Hampshire police in 1983.   Half of my career was spent as a detective rising to the rank of Detective Chief Inspector prior to becoming the commander of the Isle of Wight.  Further promotions took me to the rank of Deputy Chief Constable in Leicestershire.  My career was incredibly varied and I led murder investigations, public order and firearm operations and was regional commander for the Olympics in 2011.

There is no such thing as a typical day for me at work, I could attend multi agency child case conferences during a morning where we would devise an action plan with the intention of keeping children safe. I could then be attending a serious crime scene and coordinated our response with the intention of solving it.

Why did you choose the Police?

Simply, I joined to look after the vulnerable in our society and to lock up bad people.  I learnt very quickly not to judge as there is actually a fine line between being a victim and a criminal.  The two go hand in hand and not everyone has had the safe, caring and loving upbringing that I experienced. I learnt that if you have not experienced love, haven’t been nurtured or educated then it isn’t surprising that you can make the wrong choices in life.

How did you get to where you are now and did you face any challenges along the way?

I worked incredibly hard and learnt to persevere in the face of failure.  I also learnt to compromise.  I failed the Sergeants exam 7 times prior to passing and failed a number of promotion processes before getting through.  As a gay woman working very much in a man’s world it is fair to say that I had to work and be flexible to overcome barriers.  I accepted unpopular postings and made the best of them.  For example, on my promotion to Detective Sergeant I was posted to the Fraud Squad.  Attention to detail and numbers wasn’t my strongest suit but I knuckled down and made a success of it.

A positive attitude really helps to overcome challenges. On a few occasions I was posted to jobs and given roles that made my heart sink.  I would wonder ‘why me’ and it was only later that I realised that I was occasionally ‘picked on’ not because I was disliked or disrespected but for quite the opposite.  Senior officers knew I would work hard, knuckle down and resolve the issues faced.  I came to relish fresh challenges that took me out of my comfort zone.

I also tried to be the best I could be.  For instance, once I had passed the Sergeants and Inspectors exams in my own time I undertook a Master’s Degree at Portsmouth University in Crime and Policing.  The culture within policing is a strong one and I did not want to become institutionalised.  I actively sought out new thinking.  The Master’s made me actively think about issues in a new way for example the justification of punishment.

My career in policing was a varied one, I was probably one of the last of the Omni-competent cops.  I worked in child protection, murder investigation, scenes of crime and fingerprints, fraud squad, command of firearms and public order to name but a few areas.  Policing has altered and individuals tend to specialise relatively early in their careers which of course is a far more professional approach.  You can’t become an instant expert as much as you might like to!

What is an important initiative that you feel passionate about in your role?

In my current role as the Chair of Trustees for the local Community Foundation I am passionate about local unsung charities.  On my retirement from policing I assisted in the formation of a brand new charity called Women in Philanthropy (WiP).  We are a real mix of local women who have got together in order to support three charities every year.  We assist with coaching in relation to presentation skills and via sponsored events give them an opportunity to raise their profile and educate our communities.  The events are well supported and WiP membership has raised many thousands of pounds in support of the work being undertaken to support the vulnerable and those unable to help themselves.

What is your biggest achievement and what gave you the determination to succeed?

My career in policing culminated in the awarding of the Queens Police Medal and an honorary degree of Doctor of Law from De Montfort University. I had loved my career but I had taken on additional work and became the national policing lead for LGBT communities. This work was undertaken in addition to my policing role and was time consuming.  It felt good that this extra effort was recognised.

My determination came from being value driven and undertaking a job I believed in.  Policing is about protecting the most vulnerable, supporting victims and safeguarding communities.  My childhood taught me the importance of hard work and of commitment, the importance of seeing something through and not giving up.

What’s great about being a female in your role and what challenges did it bring?

As a woman in policing in the 1980’s I was a tiny minority and surrounded by men.  The fact that there were so few women meant that we stuck together.  We looked after one another and supported one another.  I formed friendships that remain to this day and the ladies that I met whilst working in Portsmouth still meet at least once a year over Christmas.  We were referred to by the men as the ‘Coven’ and yes I think they were a little bit frightened of us when we got together!

I experienced many challenges, particularly in the early years of my career. I was the first female Detective Inspector in Hampshire Police. This remained the case for a three-year period until two other women reached that rank. I remember feeling enormous relief as during that three-year period I had felt considerably exposed.  It felt like all eyes were on me waiting for me to fail – I dint, but the pressure was intense.

What is the biggest lesson that you’ve learnt along the way?

To be flexible.  I mentioned earlier about getting roles that I was unhappy about but making the best of it.  That self-discipline and willingness to accept and make the best of the deal dealt helped me to succeed.  I wasn’t being passive as I actively sought out new challenges and opportunities e.g. career progression and further education but I was part of a disciplined service and I remained positive when given postings and roles I didn’t really want.  My willingness to be flexible, to remain positive and actively learn from each posting assisted in my professional development.

What advice would you give females trying to progress their careers?

Find someone you admire and learn from them.

Take yourself out of your comfort zone and seek out new roles and challenges that stretch you and will help make you the best you can be.

Be the woman that helps other women up the career ladder and doesn’t kick the ladder away. Marlene Albright said there’s a special place in hell reserved for women who don’t help other women.

Carpe Diem (Seize the day).  Make the most of your time on this earth as you’re a long time dead…

What is the best bit of advice that you have received?

To be me, to be the same person at work as I am at home.

As a gay woman in my early policing career the environment was distinctly unhealthy.  To safeguard myself I remained private and although personable I did not show an interest in others or their lives as I was fearful of receiving questions I didn’t want to answer about my own life.  Once I was myself and was honest about who I was my career blossomed.

Can you talk about a female who has been your inspiration?

Pat – Pat developed breast cancer many years ago.  She continued to work and met and married.  Unexpectedly she became pregnant.  She’d been told that her Chemotherapy treatment had made pregnancy extremely unlikely.  Whilst pregnant the cancer returned and Doctors told Pat that she must abort the baby and start treatment.  Pat refused, she had the baby and twenty-five years later we still have Pat and her adult son Casey.

Pat is the most value driven, brave and inspirational woman I know.  She was Hampshire Police’s first home grown female Superintendent and the whole Force cheered.  She always helped and encouraged other women and there was not an ounce of jealousy when other women found success.

What motivates you outside of work?

I love reading, some University friends and I read and discuss a piece of poetry on a weekly basis.  I enjoy travelling and since retiring from policing my partner and myself have traveled extensively.  I am enjoying my voluntary work with charities, particularly coaching charitable groups in presentation skills.

My partner, my family and my friends are my real motivation.

Is enough being done to address gender imbalance, what else could we do?

There is always more that can be done.  On balance I think positive discrimination would be a step too far. Positive action remains the way forward. Progress is slow but when I look back to where women were when I joined policing in 1983 and where it is now I can see that enormous progress has been made. Women must continue to help and support other women and men must be encouraged to be allies.

Women’s groups would help further.  As a police officer I set up a number of ‘self-help groups’ including LGBT and BAME as well as women.  These networks became influential and negotiated changes with senior management.

What advice do you have for aspiring leaders?

Work on your development both professional and personal.  Do this work in your own time but seek out fresh challenges in the work place. Volunteer for some things that are beyond your own role. For example, set up a woman’s group or network if it doesn’t already exist.  If it does exist, then take a leading role.

It’s important to be comfortable in your own skin.  To be yourself.  Too many leaders put on a mask in the work place but those that happen to inspire are those who can be personable not just professional.  It was only when I felt able to communicate with people on a personal level and was happy to be the same person at work that I was at home that I felt that people really responded to my leadership.  I think it is important to really know yourself, your strengths, your weaknesses and your leadership style in order to become the best you can be.

What has been the best advice that you have received?

A chap called Tim Jackson, a Chief Supt with Cheshire police, told me to come out in the work place as gay.  This was easier said than done as being in the ‘closet’ had become a habit.  It was the best piece of advice I was given. When I finally became myself work suddenly became a whole lot easier.

What would you say to your 16-year-old self?

Follow your values, remember making decisions with your heart as well as your head is important.  Trust people until they prove themselves untrustworthy, don’t judge others as you don’t know what has or is going on in their lives.  Judge behaviours not people.