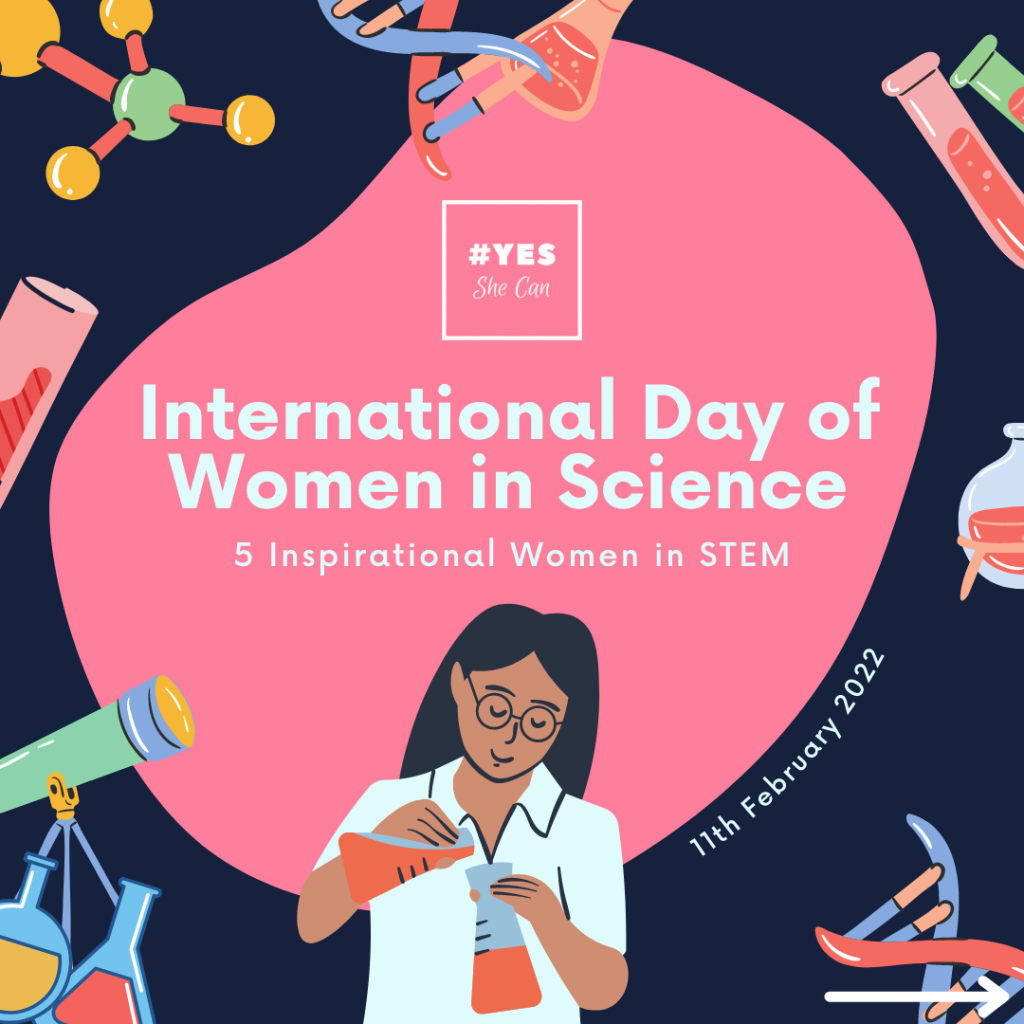 Because February 11th is International Day of Women and Girls in Science, we wanted to share 5 inspirational women in STEM with you!

Rita Levi-Montalcini was born in 1901 in Turin, Italy. She was raised by an authoritarian father who was strongly opposed to women continuing their education after high school. His demeanour was both a detriment and an impetus to Levi-Montalcini’s ambitions.

“At 20, I realised that I could not possibly adjust to a feminine role as conceived by my father and asked him permission to engage in a professional career.”

In 1936, Levi-Montalcini graduated with honours in medicine and surgery but decided not to pursue a career as a doctor after being inspired by Giuseppe Levi, a professor, histologist, and researcher.

Italian Rita began her scientific career in danger, as a Jew in Fascist Italy, but it ended in success when she received the 1986 Nobel Prize in Physiology or Medicine for the co-discovery of nerve growth factor.

Rita Levi-Montalcini spent much of her later career ensuring that other scientists had access to funds, equipment, and support after facing so many obstacles herself.

She was also a researcher and mentor up until the age of 103 when she passed away.

Alice Ball was an African American, born in 1892 in Seattle, Washington. She was best known for her discovery of the treatment for leprosy which was used up until the 1940’s.

After receiving undergraduate degrees in pharmaceutical chemistry and pharmacy from the University of Washington, Alice Ball transferred to the College of Hawaii, where she became the first African American and first woman to receive a Master of Science degree in chemistry in 1915.

Because of the “Ball Method’s” effectiveness, leprosy patients were discharged from hospitals and facilities all around the world, including Kalaupapa, an isolation facility on the north shore of Molokai, Hawaii, where thousands of leprosy patients had died in previous years. These exiled people may now return to their families, free of leprosy symptoms, thanks to Alice Ball.

In 2017, Paul Wermager, a scholar at the University of Hawaii-Mnoa who has been researching, publishing, and lecturing about Ball for years, established The Alice Augusta Ball endowed scholarship to support students pursuing degrees in chemistry, biology, or microbiology in the College of Natural Sciences. Through this scholarship, we are recognising the significance of Ball’s work. Paul Wermager said “Not only did she overcome the racial and gender barriers of her time to become one of the very few African-American women to earn a master’s degree in chemistry, [but she] also developed the first useful treatment for Hansen’s disease. Her amazing life was cut too short at the age of 24. Who knows what other marvelous work she could have accomplished had she lived.”

Rosalind Franklin was born in 1920 in London, England. She was an English chemist and X-ray crystallographer who contributed to understanding the structure of DNA which led to the discovery of the double helix.

Rosalind studied chemistry at Cambridge, though she was not allowed to graduate since she was a woman. She then became involved in national war work by joining the British Coal Utilisation Research Association in 1942. After the war, Franklin accepted a postdoctoral research position in a public chemistry laboratory in Paris. In 1950 she joined John Randall’s department at King’s College London where the critical X-ray photograph 51 was taken.

Not only was she a scientist, she was also active in trade union organisations and the women’s suffrage movement that fought for women’s rights before her untimely death at the age of 37 in 1958.

Jane Goodall was born in 1934 in London, England. She was best know as being a great scientist, conservationist, and humanitarian whose seminal discoveries altered our understanding of what it means to be human.

In the 1960s, with no formal academic training, Jane Goodall ventured to the forests of what is now Gombe Stream National Park in Tanzania, to observe chimpanzees in the wild. The insights she made altered the way we understand our place in the natural order and Jane’s work opened doors for other women in science.

She has stopped doing field work but continues to raise money to protect the chimpanzees and their habitat.

Aisha Elsafty specialises in ‘AdHoc networking’ which involves the connecting of computers, mobile phones and other computational devices via wireless technology that are used to establish networks in dynamic and challenged environments, like disaster areas and developing countries. She states that: “My faith inspires my work in many different ways. The Qur’an gives emphasis on putting our actions and beliefs into an analytical test, and to continuously challenge the views of our predecessors.”

This is by no means an extensive list, but we believe that everyone of the women named deserves to be recognised for their acts and accomplishments! You can find more inspirational women here