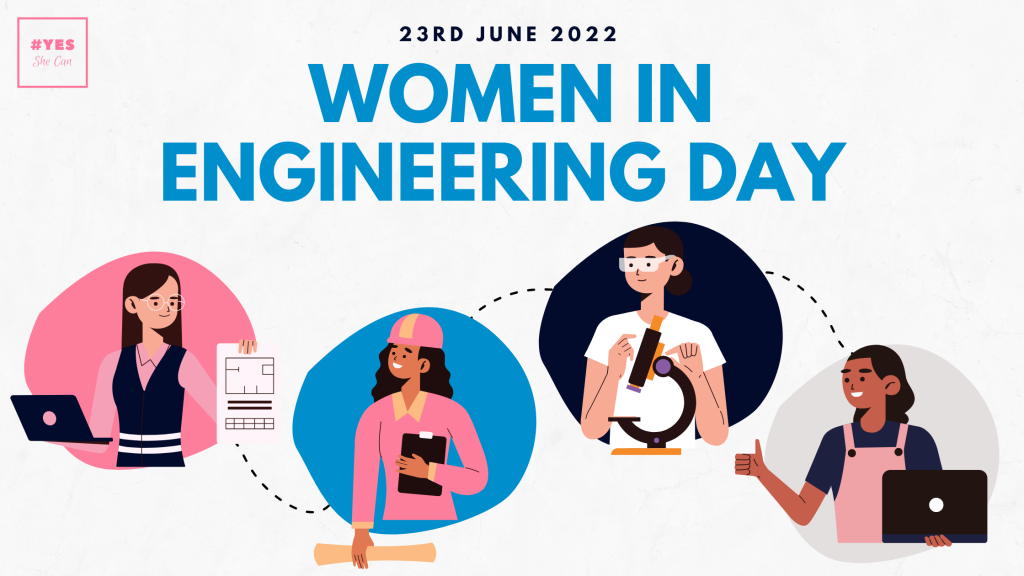 June 23rd is Women in Engineering Day! This day is all about celebrating and recognising the tremendous work that women engineers do all around the world. It is also all about encouraging the growth of women within the engineering sector!

In this blog we will discuss the importance of Women in Engineering Day and share some remarkable women engineers.

The history of Women in engineering day:

Women in Engineering Day was established on June 23rd, 2014, as a national campaign for the Women’s Engineering Society’s 95th anniversary. Since then, the awareness campaign has grown massively.

In 2016 it received UNESCO endorsement, and in 2017 it became worldwide for the first time as a result of the interest and enthusiasm generated by the international audience and participants in previous years.

why is this day so important?

Women in Engineering Day is so important because it not only recognises the hard work that so many women  engineers put in every day, but it also encourages young women and girls to seek careers in engineering. It highlights the fantastic career opportunities available to women in this career industry and promotes the growth of women in the engineering sector, making it in becoming a more inclusive industry.

There are so many brilliant women engineers we could name, but here are a few who are heroes, trailblazers, and inspiring role models:

Patricia Bath was an American ophthalmologist, inventor, humanitarian, and academic.

Not only was she the first African American woman doctor to receive a medical patent, but she was also the first to complete a residency in ophthalmology.

She transformed the face of medicine when she discovered and invented laserphaco, a new device and technique for cataract surgery. Her incredible work has aided countless patients and people. Her achievements were also very beneficial to African Americans’ rights.

Hedy Lamarr was a successful Hollywood actress as well as a brilliant female inventor! However, as an actress her innovative genius was overlooked by society.

During WWII, Hedy Lamarr and her work partner, George Antheil, invented a “Secret Communications System”, that prevented enemies from jamming torpedo guidance signals, also known as “frequency hopping.” This concept aided in the creation of technologies such as WiFi, GPS, and Bluetooth communication systems!

Emily Roebling is best known for her contribution to the construction of the Brooklyn Bridge, the world’s largest suspension bridge at the time and the first to use steel cables, which was finished in 1883.

When her husband, Washington Roebling, the project’s Chief Engineer, became ill and bedridden, Emily stepped in and worked as a liaison with the engineering team, and over time she demonstrated such expertise in building, materials, and cable production that some observers thought she had taken over as chief engineer, though she advocated that her husband keep the title.

Emily was the first person to cross the bridge before it was officially opened in May 1883, waving a rooster as a victory sign.

Mary Anderson’s idea is still used by everyone who drives a vehicle today and has saved the lives of countless individuals by creating this safety feature. She created the windscreen wiper!

During a trip from Alabama to New York City in 1902, she came up with the idea of a rubber blade linked to a spring-loaded arm that would sweep across the windscreen to clear rain, snow, and dust, as the bad weather was obstructing both her and her driver’s vision. To see, her driver drove with both windows open and used his hands to wipe the snow and ice off the windshields.

Though many people had similar ideas, Mary’s was the only one that worked successfully. The only problem was that not many people possessed vehicles at the time, so people laughed at her invention, but it didn’t last long because by the 1913’s, many people owned cars and windscreen wipers had become a necessity.

Roma Agrawal MBE is an engineer first, but she is also an author, speaker, and broadcaster. Roma aims to raise the profile of under-represented women in the industry and educates young people about STEM careers.

She has worked on many of the buildings we’ve all (if you live in the UK!) probably seen such as The Shard in London as well as designing its ‘spire’. Roma was awarded an MBE in 2018 for her services to engineering.

Her hard work doesn’t stop there – she has released numerous books, for both adults and children, about the back story of engineering and hosts her own podcast on the same subject.

Mimi Nwosu is a civil engineer working currently at Heathrow Airport. Her role is as a specialist engineering expert in building structures and concrete. Surprisingly, despite her amazing hard work, Mimi wasn’t originally aiming to become an engineer and switched uni courses when she discovered her interest in engineering.

Since then, Mimi has gone on to be a key educator and myth-busting misconceptions about her career, sharing her insight and enthusiasm and being a Role Model for other women.

Norah Magero is a mechanical engineer from Kenya. Norah is a strong advocate for women’s rights and has led a collective of women in her community to pursue their passions as well as encouraging them to grab education and career opportunities.

She is the first Kenyan to be awarded the Royal Academy of Engineering’s Africa Prize for Engineering Innovation. She was recognised for her work for helping to invent and create the Vaccibox. This is an easily portable, solar-powered refrigerator for medical supplies and food to be safely transported to those who have been affected by climate change.

Amy Wright is a senior civil infrastructure engineer at Design ID. Whilst previously working at Farrans Construction, she was a key part of delivering the Northern Spire bridge!

Amy’s career in engineering was sparked after she visited le-sotho in Africa and saw the lack of basic infrastructure in the country. Since then, she’s gone on to lead community projects in the UK and across the world, such as development schemes in Malawi and Kenya and creating and distributing educational workshops in secondary schools.

Hannah Gorman (formerly Hargreaves) is one of #YesSheCan’s Role Models for engineering. She is flying the flag for women in engineering and is passionate about encouraging more women to join the industry.

Hannah is a Clear of Works for Openreach Chief Engineers and began her journey into engineering after she felt unmotivated about her customer service job. She saw the Openreach engineering team and decided to bravely switch careers. Since then, Hannah has continued to inspire women through her posts on her LinkedIn page and by sharing her career journey.

Paula McMahon is an award-winning engineer, the ICE North-East Chair and ICE Trustee and also the current holder of the European WICE Awards Lifetime in Engineering.

She has experienced and been part of many successful engineering projects such as designing highway gantries in the UK, roads in Dubai and inspecting the Thames Barrier and power stations in France.

However, Paula has now turned her attention to educating, encouraging and inspiring the next generation of engineers. She does this through mentoring, creating the Engineering Together website, making educational videos on the Primary Voices YouTube channels and creating and writing the Lottie books.

There are so many amazing women engineers that we could name and this is by no means an extensive list! You can find more inspiring women here.