#YesSheCan In-Depth: Why White Women Need To Be Allies 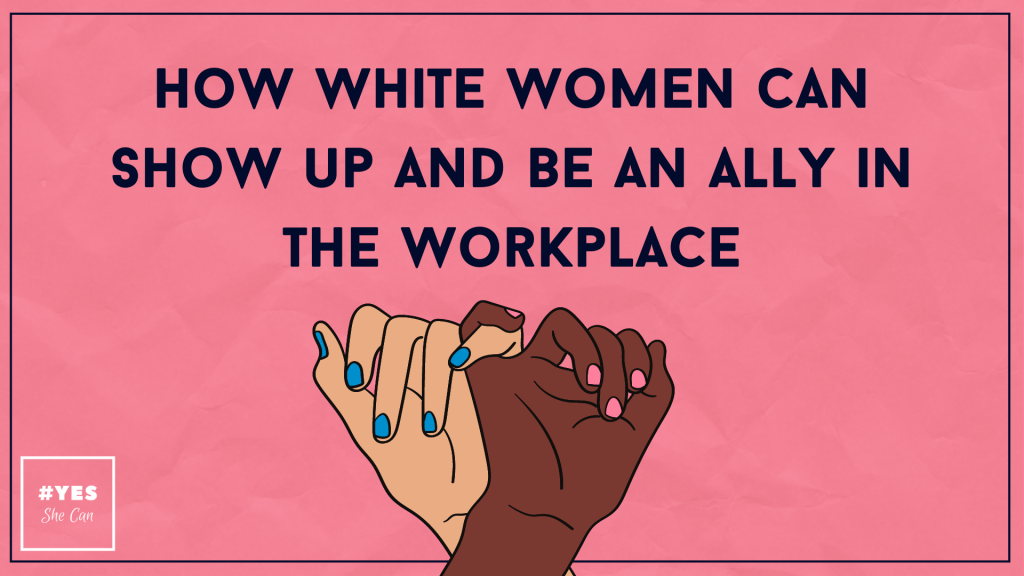 The month of October is dedicated to Black History, a celebration of black inventors, creatives, role models and more. Despite this, we wanted to make this blog to remind ourselves and others that it shouldn’t be a month – but an everyday celebration.

This #YesSheCan blog will talk about why we need more white women to be allies in the workplace and how you can start today.

What is allyship / showing up?

Allyship is the continual investment and act of recognising your privilege and using it to support and show up for women of colour. This isn’t a lip service or one-time thing, it’s a lifetime commitment to supporting fellow women.

It’s also about education yourself on issues which don’t affect you and recognising how it does affect women of colour in your life. Once you’re informed of that reality, you can be consistent, authentic, and true to the cause of being an ally.

Why do we need it?

There are clear benefits of becoming more of an ally to women of colour in the workplace such as creating strong relationships, becoming more educated on issues that affect your peers and supporting a better future for everyone.

However, racial humility is key to allyship for white women. It’s about not simply learning on a surface level of why women of colour face the issues they do – but actively listening to them. This is at the core of why we need allyship.

Actively listening to women of colour is largely needed so white women can understand their issues, but it’s also a space to acknowledge if we get things wrong. It’s about being held accountable and understanding it’s not negative, but a learning curve which you can pass onto others.

You might be thinking, “why is it just white women that need to be allies and not other women?”

This down to a commonly invisible bubble called – white privilege. Privilege is a system which one group of people are protected and supported by. In this case, it means that white women don’t experience prejudice based on their race whether that’s in public, their personal lives, or careers.

Research even shows that women of colour aren’t being recognised in studies and surveys for women in the workplace as much as white women are.

Ultimately, whether you find it uncomfortable or not, it puts white women in a position of power over women of colour. Instead of feeling helpless at this reality, we can change it by being actively involved in allyship.

Steps to becoming an ally in the workplace

Be aware of microaggressions, racial bias or abusive terms being used towards your peers – and stand up for it. More than one in three women of colour had experienced racist ‘banter’ or so called jokes in the workplace. Whether that’s acknowledging the discrimination in the moment by saying “that’s not appropriate and is discrimination” or reporting it to a leader.

Celebrate achievements, leadership, or the work of women of colour in your workplace. One study found that although women of colour held more qualifications and experiences for a job than their white counterparts, they were less likely to receive promotions and recognition. We all know women often go under the radar for their work, but for women of colour it’s basically buried. Often those women will go left with no thanks or acknowledgment of their great work.

For example, if you’re working in a team with a woman of colour but it seems that the positive feedback is being focused on you although your peer did equal work – speak up. Don’t take ownership of that feedback, let it be known that you worked as a team and recognise both of your strengths.

Be a reason that women of colour feel happier and more positive about their work – as they and everyone else should!

Most importantly, listen to women of colour. If a peer comes to you in confidence with an issue they’re facing, don’t dismiss their problem or try to explain it to them. Listen and understand. Even if you think you can empathise, doing so will be taking the power from them to you.

As mentioned earlier, racial humility is part of being self-aware that you won’t likely ever experience the same as a black woman in your workplace – so actively listening and taking action is a huge step.

“True allyship demands that it move from conversation to action.”

For more resources and advice to inform and educate yourself on the issues faced by people of colour, visit our dedicated page or click the links below for more support.