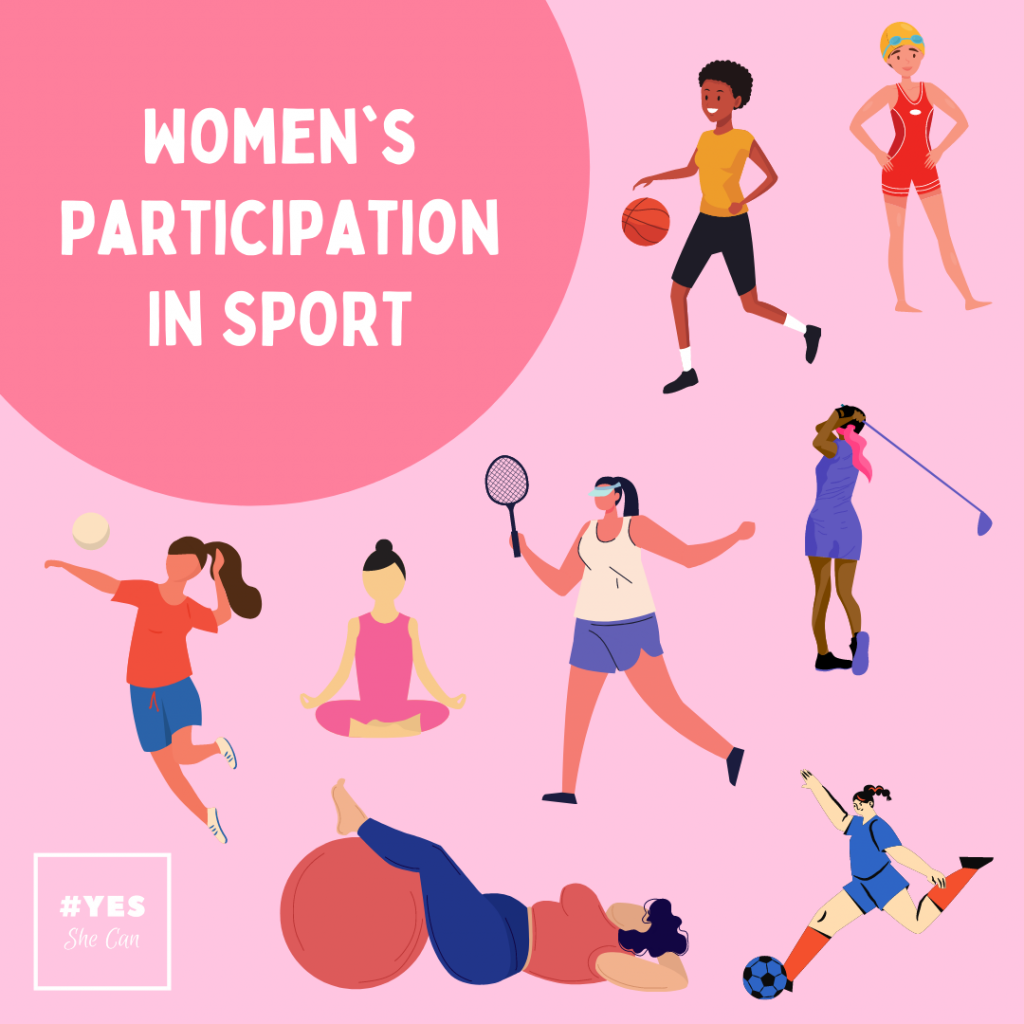 Stereotypes about gender are neverending…

Males cannot wear dresses or skirts, only females can.

Males should like football and rugby whilst females should focus on less ‘rough’ sports or just avoid it altogether!

This blog focuses on women and their participation (or lack thereof) in sport and ways in which we can improve upon this. If you are the head of a company or work in a place where you can educate or advise other women about ways in which to help increase female participation in sport then read below for more information and possibly some ideas you could try and implement.

Why are fewer women partaking in sport?

From various studies, research has commonly found that women do not partake in sport as much as men due to a lack of confidence, a lack of time and for fear of being judged by others along with the following issues:

A recent study from Women in Sport found that girls continue to be significantly less active than boys, with a gap of 213,000 between the two groups (prior to the pandemic, between 2019 to 2020, looking at children aged 5-16).

Following on from this 42% of the girls (aged 12-14) avoid exercise when they have their period.

As mentioned in a previous blog, for the majority of women, the workload at home (which includes cooking, cleaning and looking after the children) is significantly greater compared to that of their partner (when in a heterosexual relationship). With this imbalance, it usually results in women have less leisure time to take care of themselves both physically and mentally.

On average, women receive a lower salary than men. Being in a low income household makes it even more difficult to get involved with a new sport as there are so many costs including…

– Memberships to a sports club or gym
– Sports Clothing

This isn’t a cost in terms of money, but there is a much higher risk that women have of being attacked or assaulted on their journey to and from the place where they choose to go for sport.

The Crime Survey for England and Wales estimated that for the year ending March 2020 there were 773,000 adults aged 16 to 74 years who were victims of sexual assault (including attempts) in the last year, with almost four times as many female victims (618,000) as male victims (155,000).

Whilst many sportswomen have set incredible examples of how successful women can be in the sporting world, some women still find it hard to see it as a realistic career path; not for lack of wanting to pursue it as a career but because of the significant difference in support for women’s sports versus how much is given to men’s sport.

48% said their earnings were insufficient compared to sportsmen.

58% indicated they do not have access to enough coaching support compared to sportsmen.

53.3% said they earn no money from funding by their club or governing body.

This is by no means an extensive list, but the fact that women have so many of these barriers means that they are already put at a disadvantage before they even think about taking on a new sport or form of exercise.

What can be done to help?

No single person or business or group is expected to make all the changes suggested below, but if you find that any of these could be implemented into your life or organisation then please give it a thought as this is an issue that affects some many women on a daily basis.

According to Bodyform, In the UK, 1 in 10 girls can’t afford to buy menstrual products AND 1 in 7 have struggled to afford them.

So, regardless of whether based in a school, at work or at an exercise facility, if you are able to then do consider looking into providing sanitary items for those in need.

Create an allocated space or put on classes for children to attend whilst their parent / carer are able to go and exercise without having the worry or expense of finding childcare.

Be more lenient with what people are able to wear to classes. Clothing can be very expensive depending on the type of sport and it all adds up with other factors such as the number of children wanting to join a club from one household or, even an individual alone having to afford the additional equipment required to even play in a game!

Explore partnerships with transport providers for those that either don’t have access to a car or don’t feel safe travelling alone. If you’re in sports club you could put together a sign-up sheet for people to write down if they’d be willing to offer a lift and then try and arrange this for each week.

When signing up new participants, you could also make a point of leaving a section to ask ‘Do you need any help with transport, clothing or do you have concerns with your personal safety when getting to and from to this particular club / team?’. This saves them from having to say anything aloud and keeps it a private matter between you and them.

Once you’ve established who needs support, you can set to work in finding ways to help them more specifically.

Are there any groups offering support?

Thankfully there are companies that are here to give advice and lend a helping hand where they can.

We are one of them.

Yes She Can aims to INSPIRE, EMPOWER and ENGAGE.

Whilst our focus is on women in the world of work, we want to be a part of change to increase the number of females getting involved with sport.

This is where the two following groups come in…

Her Spirit was founded by Mel Berry and Holly Woodford to challenge the diet and fitness industry that has continued to fail women.

They are an incredible community who support women of all shapes and sizes whatever your ability or experience with exercise and diet.

To find out more about their incredible work and how you can begin to get involved, head on over to their website by clicking HERE.

Game Changers was set up by Sue Anstiss, the founder of Fearless Women. In the podcast, Anstiss talks to some of the biggest names in women’s sport.