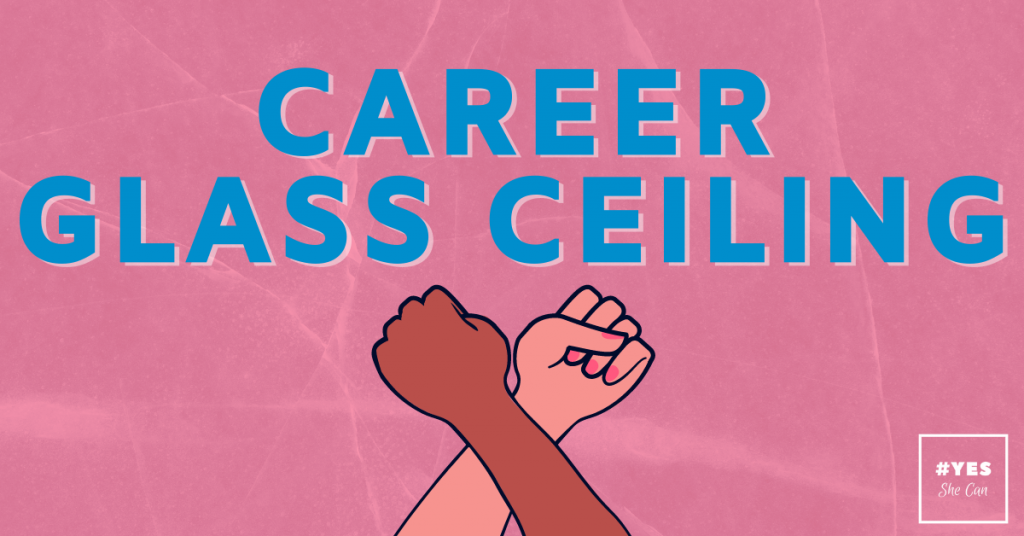 At #YesSheCan, we use the phrase ‘career glass ceiling’ in our mission statement on our website because we understand it’s a major and consistent issue specifically for women across the world and many of them don’t really know how to break through it.

So, in this blog we will be unpacking the phrase ‘glass ceiling’ and how this simple but powerful term really affects women’s career progression and inclusion and diversity in the workplace.

What does it mean?

By formal definition, ‘glass ceiling’ is defined as –

“An unacknowledged barrier to advancement in a profession, especially affecting women and members of minorities.”

This term is a metaphor for the very frequent, invisible barrier faced mostly in the context of careers and the workplace. It’s used when describing a person who can’t get or is not offered opportunities that are clearly in front of them.

Where did the term originate from?

It was first coined by Marilyn Loden during a panel discussion about women’s aspirations in 1978! She described the invisible barrier when other female panellists blamed women’s lack of career progression on how women personally behaved.

Loden combated this stereotypical and sexist view of women’s careers by stating that the barriers were organisational and not personal and that this culture was having a much greater impact on women’s aspirations.

Although this term was born over 40 years ago from significant data which pointed towards judgemental workplace culture and organisational failure, it is still relevant in 2021 as the glass ceiling is still being hit.

How are women affected by their ‘career glass ceiling’?

So, why is the glass ceiling a problem? Well, this saddening, and often discriminative barriers, can to someone based on their race, sexuality, gender or disability.

Generally, however, it is often women who are unfairly shown this barrier in their careers. Despite evidence showing that having women in senior roles help businesses perform better, 18% of women are less likely to be promoted than their male co-workers.

It’s a big worry for many women when thinking about our future. It can stop them progressing to senior roles due to many reasons which have been set for them in modern workplace culture.

Many women may feel like they won’t succeed enough, others can’t even see themselves in a senior role and another aspect is the gender pay gap. Frankly, women don’t want to apply for those senior roles or progress because they won’t get paid more.

According to research from 43 countries, the gender pay gap is higher when it comes to manager positions. As well as this, women work harder than their male counterparts as it is, so being promoted would be – more work = no pay rise.

“You have a part to play in creating a culture of respect for everyone. You can’t be a bystander in this effort. Instead, you have to take action.” – Marilyn Loden

We can break the cycle and smash that glass ceiling

Change needs to be led by organisations to eliminate this very real situation and the most important change is to recognise that it exists and knowing it may exist in your workplace. This is a big factor which will largely lead the way in shattering this invisible barrier. Positively, it is reported almost 75% of organisations worldwide have diversity and inclusion policies integrated in their workplace.

We wrote about how organisations can improve their workplace and encourage women in one of our in-depth discussions – you can find more advice and tips on our blog here.

Despite this being the main driving force, women can motivate and encourage themselves to smash the glass ceiling – but don’t mistake this with shifting the blame onto yourself. Thinking about this sad truth can often negatively impact how you feel about your own career, so making small changes to turn that mindset around will help you think clearly.

Something you can fit into your daily routine is reading about inspirational women and your own role models. You can do this is by using social media or the world wide web. Research women that you find inspirational in your industry – they may have faced and overcome successfully the same barriers as you. Doing this also familiarises yourself with the positive attitude they give out and you can adopt ways of thinking from them. You can start by reading our blog from our over 300+ role models here!

Remember, despite this unfair card women have been dealt, not only in their careers but in their general lives, you have totally got this. As we always say at #YesSheCan, don’t get angry – get even.

If you work for an organisation who may need help with their diversity and inclusion policies, you can learn more about #YesSheCan’s popular masterclasses here.

PrevPrevious#YesSheCan In-Depth: How To Be An LGBTQ+ Ally (In Life and At Work)
NextGrace Cowan – Putting myself in uncomfortable situationsNext
#Yesshecan